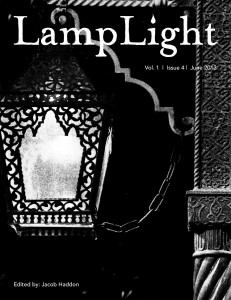 Issue 4 of LampLight is here. Our Featured Artist is Elizabeth Massie. Her story, which is loosely connected to her upcoming novel, Hell Gate, takes us to Coney Island in the turn of the 19th century. J.F. Gonzalez talks about the importance of The Horror Show, edited by David Silvia. Kevin Lucia brings is the stunning conclusion to his serial novella, And I Watered it with Tears.

Flip Flap – Coney Island, 1898. Turn of the century, with the shows, the secrets, and maybe a bit of magic thrown in.

And I watered it with Tears, Part 4 – In this conclusion to Kevin Lucia’s novella, Andy and Dequan try to find the reasons behind the deaths in their prison, before they become victims themselves.

Shadows in the Attic – J.F. Gonzalez